Get Your Manifestation Mojo

Get Your Manifestation Mojo 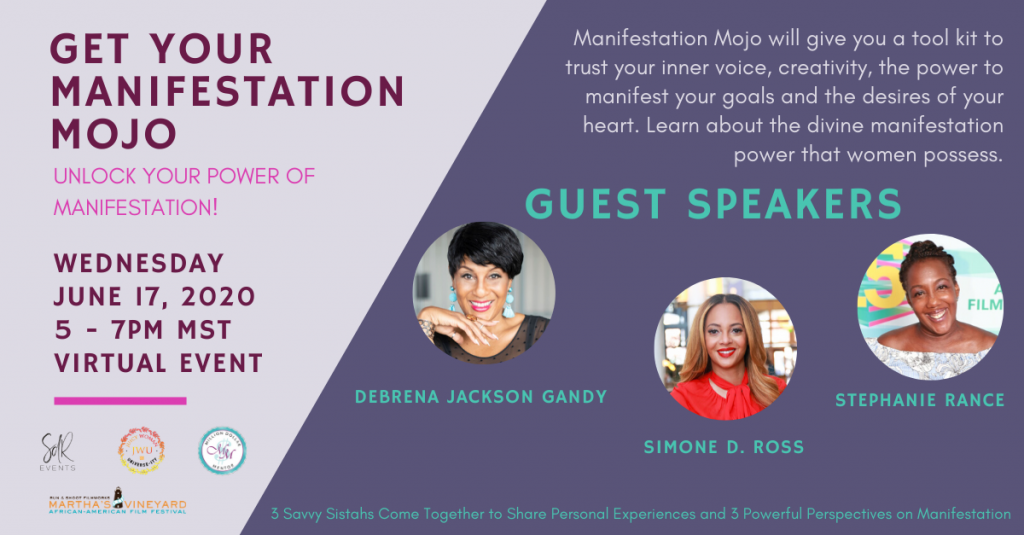 Hurry and get your tickets!!

Join us in learning about the divine power of manifestation that women possess, Get Your Manifestation Mojo will give you a tool kit to trust your inner voice, creativity, and power to manifest your goals.

Debrena Jackson Gandy is a Juicy Woman and Master Manifestress that has made her vision board her real life. As Owner of a successful 25-year company, nationally-published best-selling author of three books, mentor to 15 leading women, Master Life Coach, international traveler, featured guest on national and regional TV shows such as CNN, CNN Live, Good Day New York, Good Morning Texas and Good Day D. C, and featured in magazines such as Oprah’s O, Essence, Ebony, and Woman’s Day, she has created and manifested a life that is the fulfillment of her dreams. She is creator of Juicy Woman Universe-ity. Through her books and and her transformational events, programs, courses, and retreats she has reached nearly 100,000 women world-wide. www.MillionDollarMentor.net

Stephanie Tavares-Rance began her career in entertainment after college in 1990, working in the A&R Department at SBK/EMI Records. She eventually became the A&R Marketing Director and worked on award-winning projects such as Frank Sinatra’s (Duets I ,II ), Prince, Jon Secada, D’Angelo, Gloria Estefan and a plethora of others.

In 1999, Stephanie became the Marketing Director at Larry Flynt’s CODE Magazine, a fabulous but short-lived lifestyle magazine for men of color. Her marketing impact was immediate as she created strategic alliances with top-notch celebrities and luxury brands. After CODE, Stephanie has held various executive marketing positions at fortune 500 companies.

It was at this time that she realized that her calling was in brand marketing and event planning and established the creative outlet, RUN AND SHOOT FILMWORKS, INC. with her husband Floyd.

Founded in 2002, the Run&Shoot Filmworks, Martha’s Vineyard AA film festival is one of the fastest growing film festivals in the country. Recognized for their impeccable selection of films, premiere screenings, and welcoming environment, Floyd and Stephanie have made a lasting mark in the entertainment industry.

In addition to the film festival on Martha’s Vineyard and their new festival in Denver called The Color Of Conversation Film Series, Stephanie, and Floyd have also proceeded to produce outstanding visual work for several clients including, Family Dollar, HBO, Martell Cognac, Reebok (Allen Iverson and NY Giants) and Footlocker.

Stephanie is also on the board of Sweet Blackberry- actor Karyn Parsons organization that tells black stories via films.

Stephanie was a featured speaker this past August at Georgetown University – she spoke with marketing students about the impact of social media and starting your own business.

Stephanie has won numerous awards in digital marketing and was most recently awarded a Black Woman in Media award in June of 2018 for her work with the film festival and supporting the works of people of color. The film festival on Martha’s Vineyard is an Academy Award accredited festival in the shorts category.

Simone D. Ross is a Colorado native who grew up in Denver’s Park Hill neighborhood. Simone’s upbringing instilled in her a strong sense of the importance of community, family, and building through investing in the success and dreams of one another.

In an effort to catalyze change, elevate, and create visibility surrounding issues of workforce equity; Simone founded Simone D. Ross, LLC, a consulting firm with the vision of catalyzing human thriving through effective and integrative change management. Simone uses her 15+ years of corporate experience to bring voice to the importance of creating equitable and sound business enterprises. Simone also brings a refreshing voice and insight to many events as a Host and Auctioneer. She facilitates inspiring experiences, content, and presentations, to “ignite the light” in the participants at the events she hosts.

Simone has served as the Regional Managing Director of The Riveter, one of the fastest growing brands in the nation, leading the expansion and operations in the Denver and Minneapolis markets. Throughout Simone’s extensive corporate career she has served as the Director of Strategic Business Initiatives at SCL Health, where she facilitated strategic planning for regional hospital’s and facilities. Prior to joining SCL Health, she served as the Director of Business Development at Delta Dental, where she founded and operated the SpringRock Dental oral health corporation. Simone also spent many years at Kaiser Permanente, where she worked as an advocate for Colorado’s business community, pioneering Kaiser’s Business Development Department.

Simone is most proud of her two amazing children. She is motivated by watching them grow, thrive, fearlessly create, and explore the world.